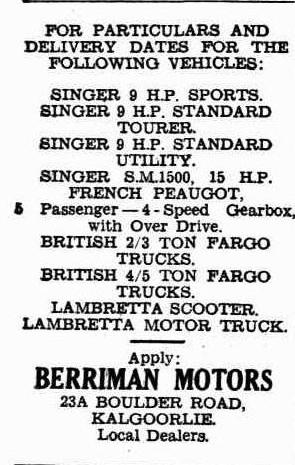 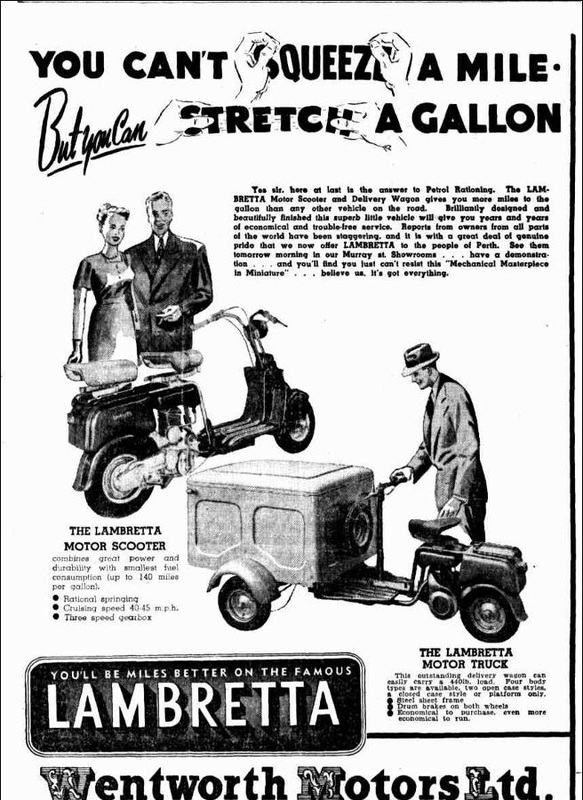 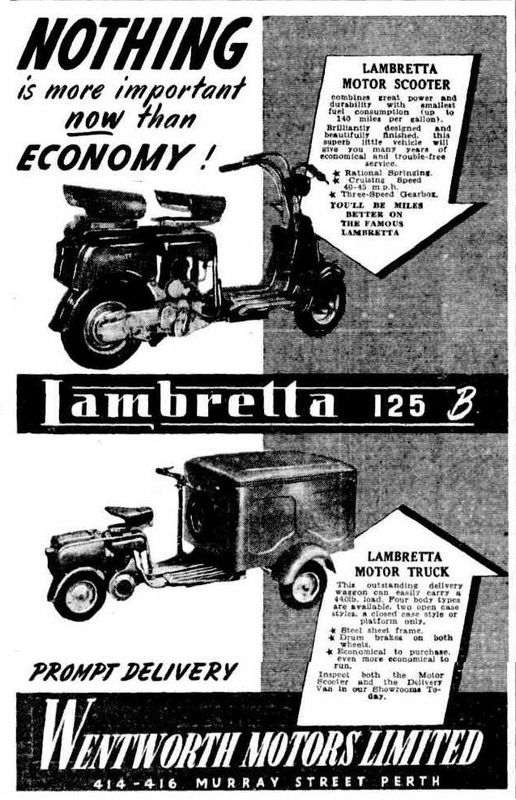 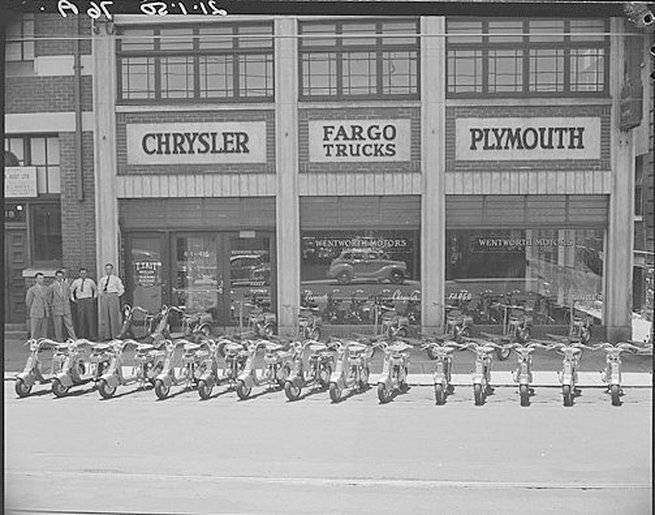 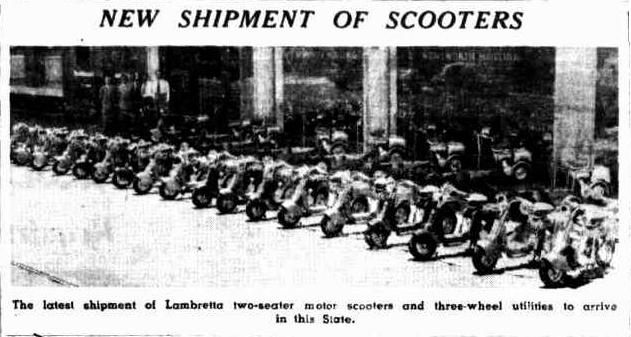 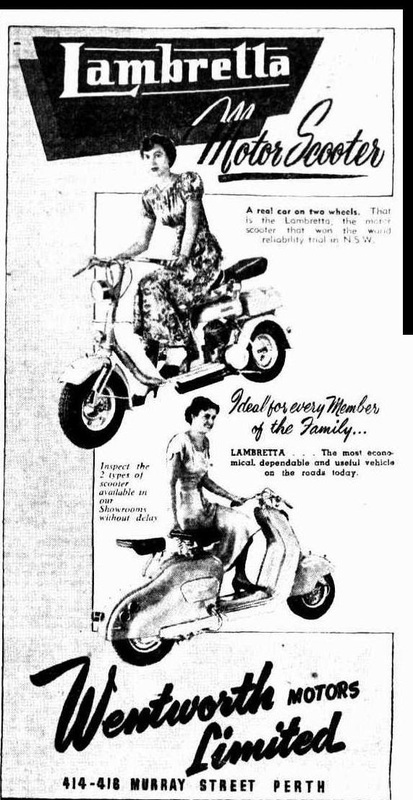 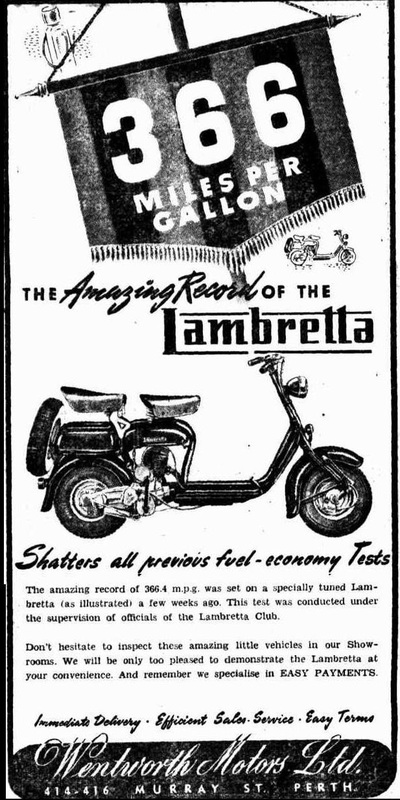 ​Lambretta Club
Notes
The Initial outing of the Narragin Lambretta Club was held last Sunday at Wolwolling Pool. it was voted a great success by all present. The pool had improved a lot as a result of the recent heavy rains, and was ideal for swimming. Miniature races were held during the afternoon and a Junior member in Bill Mahoney ran out the winner from riders of far greater experience.
A meeting was held towards the end of the day and the election of officers resulted as follow:--

The next outing will again be held at Wolwolling Pool and members will assemble at the Town Hall at 10.15 a.m. on Sunday next, December 16.

Intending members are welcome and transport will be arranged if necessary.
Note: Members need not necessarily be Lambretta owners.

Lambretta Scooter Club has scheduled a social run and picnic, for tomorrow week. Assembly point is at the rear of Christian Bros, V i c toria-ave. at 10.30. Venue is the Zoo.
Next Lambretta meeting will be at Wentworth Motors on June 12, when the drive to make every member a blood donor will be continued.​

LAMBRETTA
Lambretta Club, at their run tomorrow, will entertain Brisbane's Keith Batten, who is here during a 22,000-mile tour of Australia.
Batten will be honoured guest at a hamburger send off on Sunday night.

​(ed, note that Keith Batten was from Edgecliff, NSW. See more of his exploits on the Long Distance Riding Page)

LAMBRETTA CLUB
A very enjoyable day was spent by the Lambretta Club at Bindoon last Sunday.
Also a most gratifying sum of money was donated by members present, and contributed to the welfare of members at Boystown.
August 17 a scramble trial will be held at Coogee, and the general meeting is on August 14.

LAMBRETTA CLUB
Tony Elliott, with 10 points, won the Lambretta Trial at Coogee. Albert Vanstey was second with 9 points, and Keith Dick third with 8.

Lambretta has a run to Lake Lechenaultia tomorrow, leaving the rear of CBC. Perth, at 10 o'clook​ 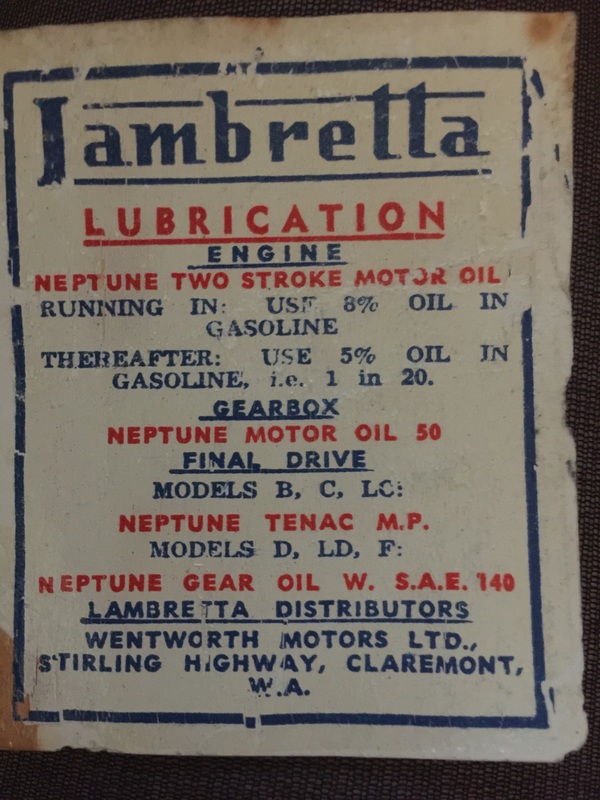 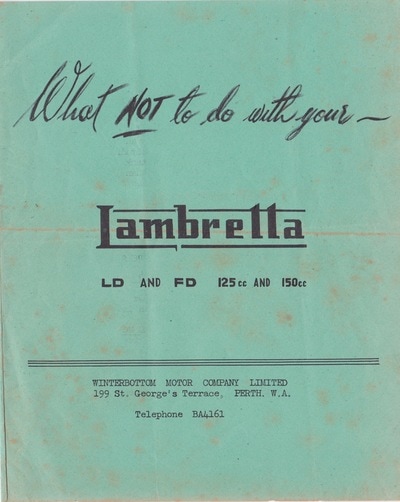 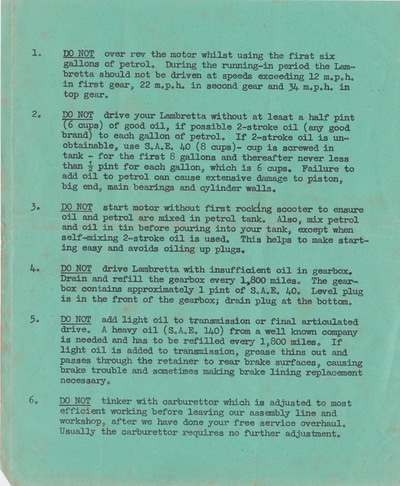 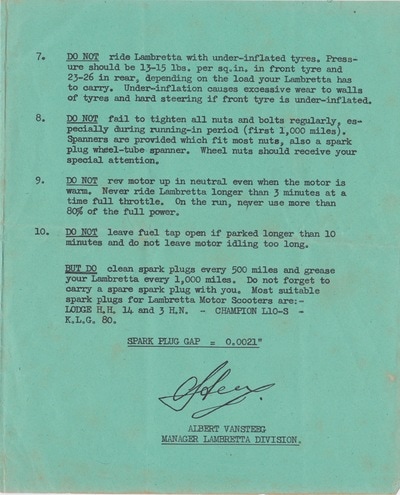 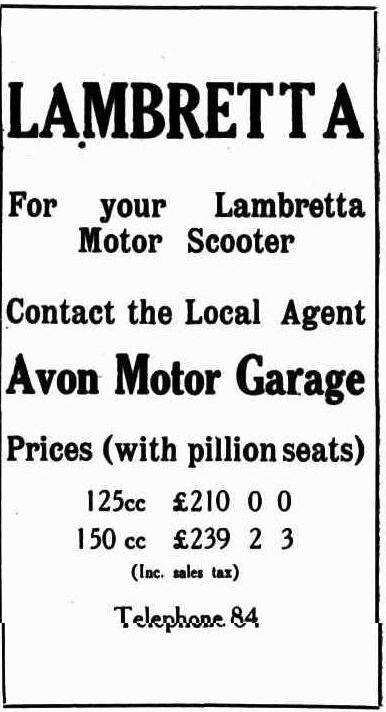 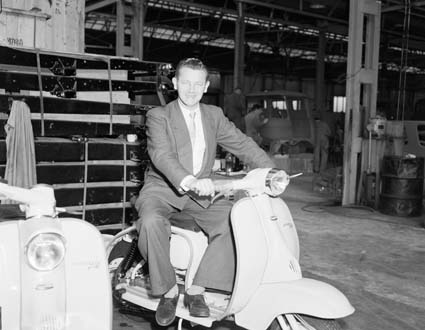 
Immigration - Migrants in employment in Australia - Commercial/clerical miscellaneous - When former Dutchman van Steeg arrived in Perth, WA from Leiden, near the Hague eleven years ago, few people had seen a motor scooter. Hard work by Albert has brought recognition to the motor scooter - and a highly-paid executive position to himself. Today Albert is the manager of a firm selling 60 to 80 Italian Lambretta motor scooters a month and he is earning between four and five times the salary he earned in his first year in Australia, when he was a struggling salesman. 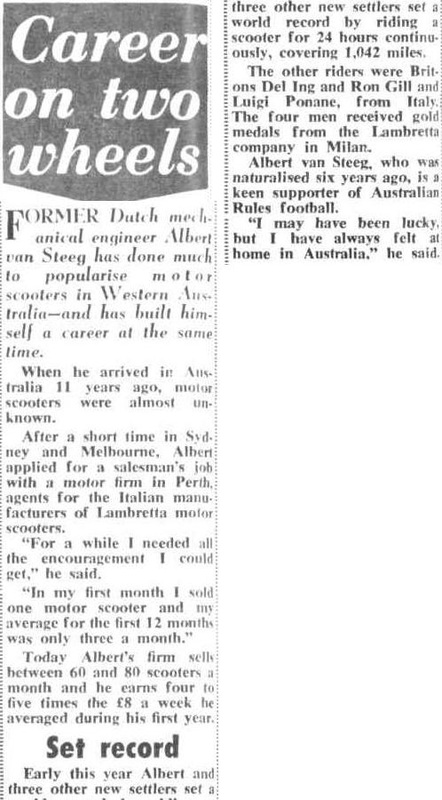 FORMER    Dutch mechanical engineer Albert van Steeg has done much to popularise motor  scooters in Western Australia and has built himself a career at the sametime.  When he arrived in Australia 11 years ago, motor scooters were almost unknown.  After a short time in Sydney and Melbourne, Albert applied for a salesman's job  with a motor firm in Perth,  agents for the Italian manufacturers of  Lambretta motors cooters.  "For a while I needed all the encouragement I could get," he said.  "In my first month I sold one motor scooter and my average for the first 12 monthswas only three a month." Today Albert's firm sells between 60 and 80 scooters a  month and he earns four to five times the £8 a week he averaged during his first year.


Early this year Albert and  three other new settlers set a  World record by riding a scooter for 24 hours continuously, covering 1,042 miles. The other riders were Britons Del Ing and Ron Gill and Luigi Ponane, from Italy. The four men received goldmedals from the  Lambretta  company in Milan.  Albert van Steeg, who was  naturalised six years ago, is a  keen supporter of Australian Rules football. "I may have been lucky,but I have always felt at  home in Australia" he said. 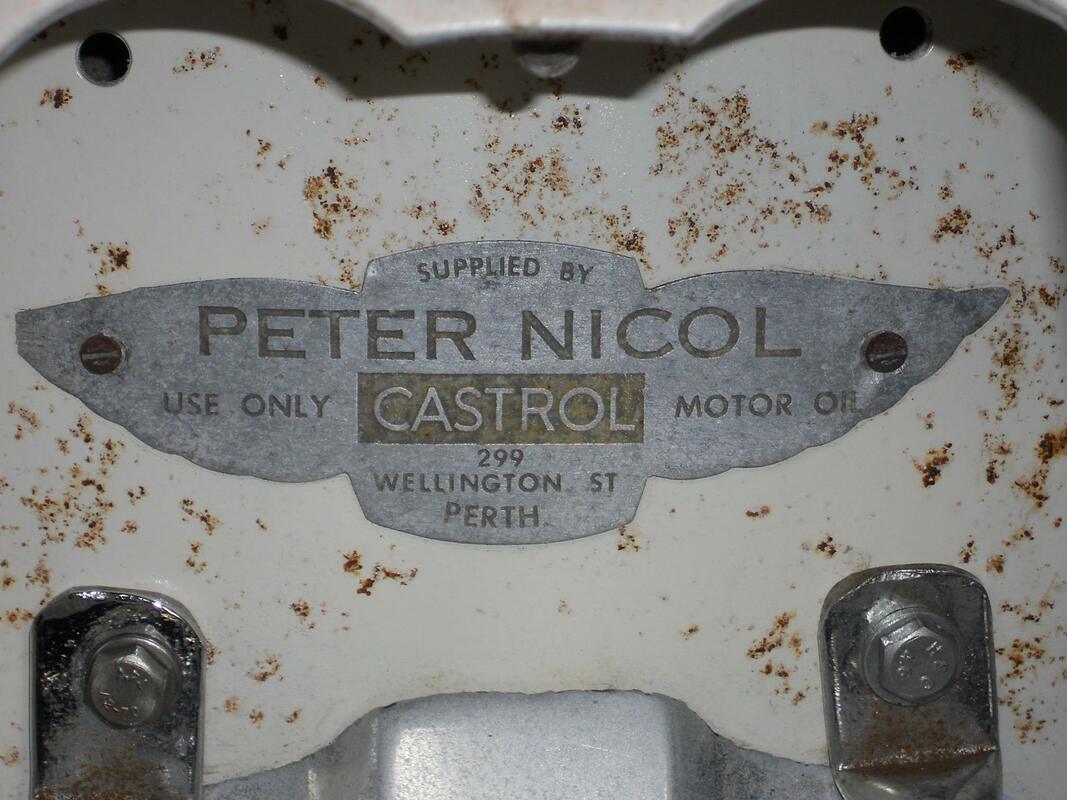 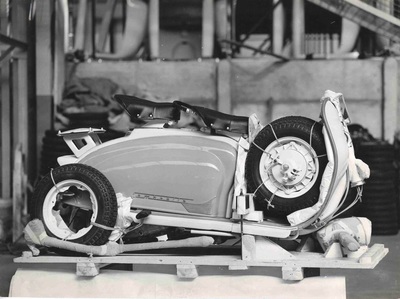 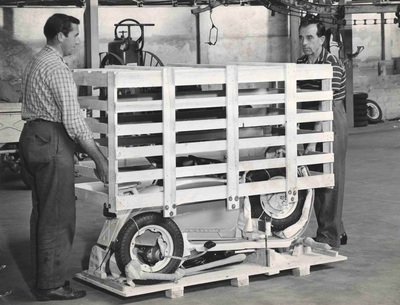 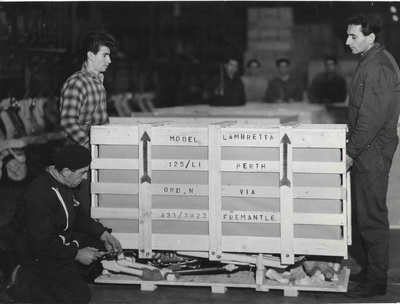 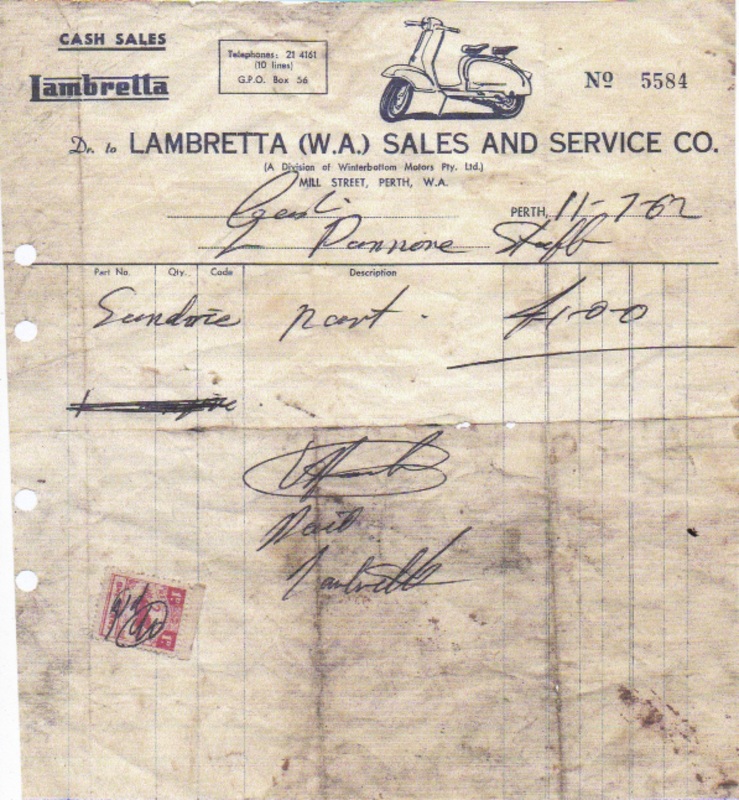 The LCoWA had been around since the beginning, but by 1974 it had definitely wound up, and had left s few dollars in the National Bank of Australia. Source: nla.gov.au/nla.news-page25991069 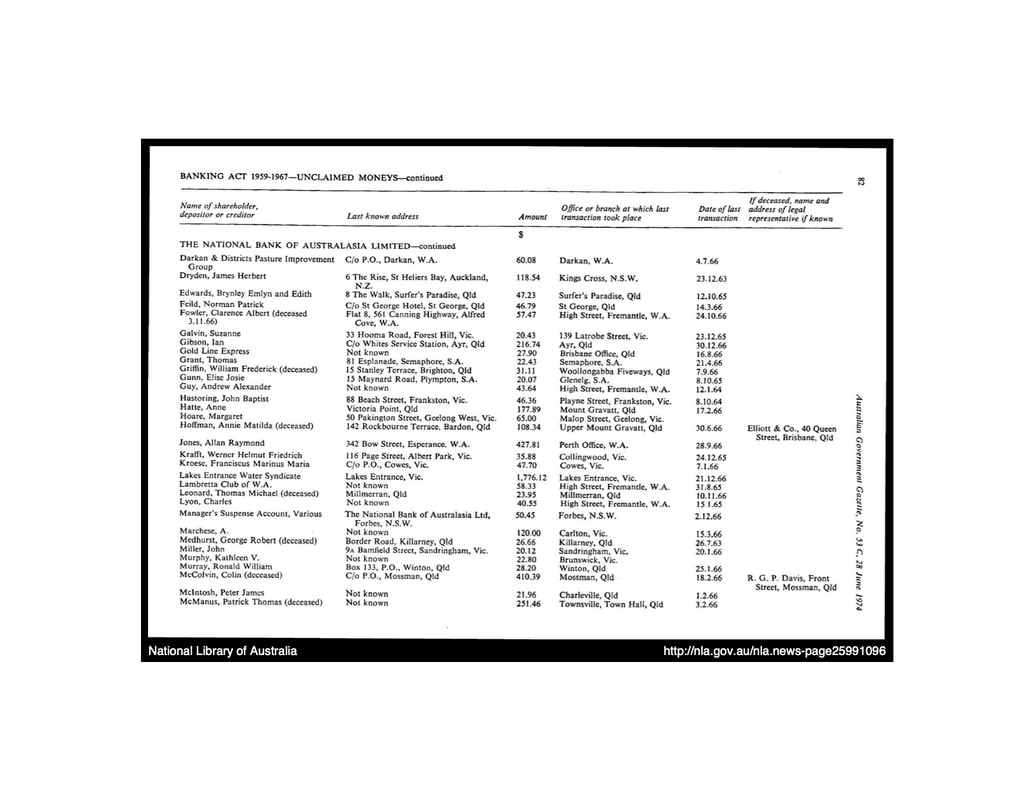 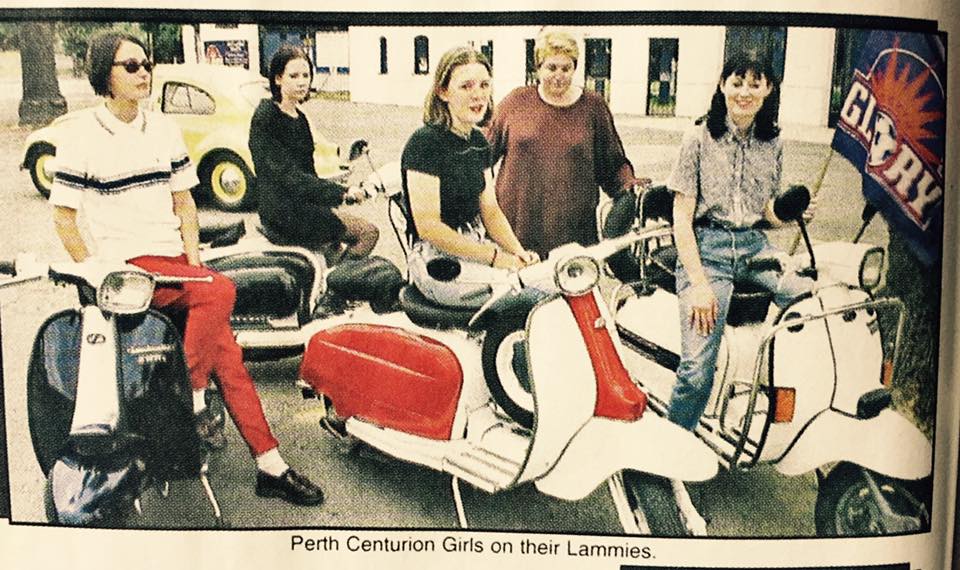 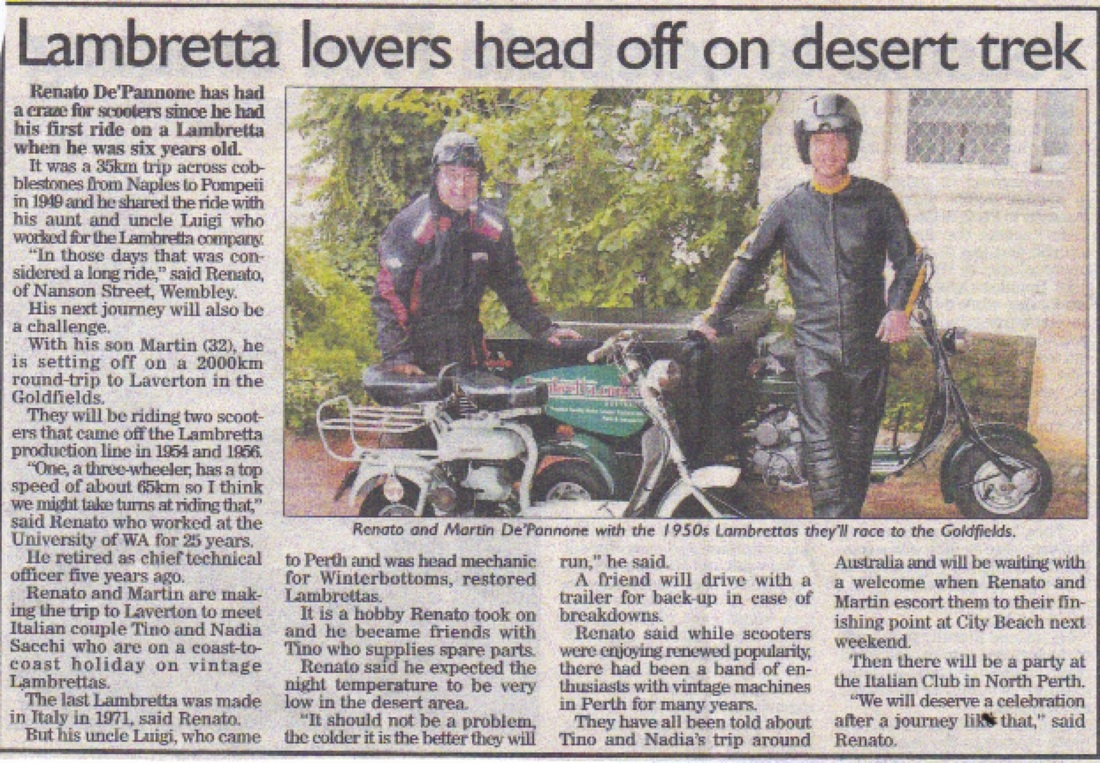