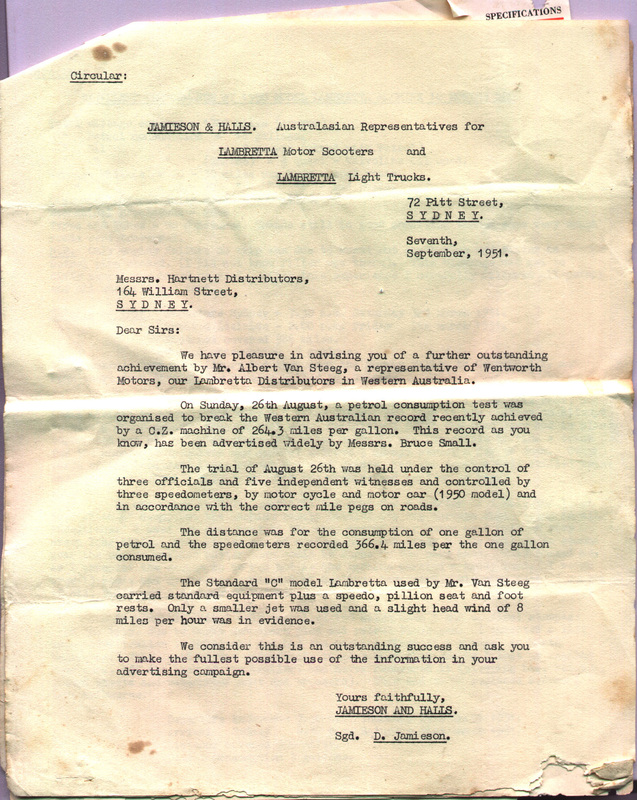 Read Carefully, you'll see that Luigi Pannone, Ron De Pannone's Uncle, was the head mechanic. He was later presented with a  gold medal by Innocenti. 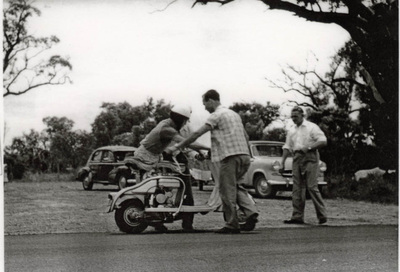 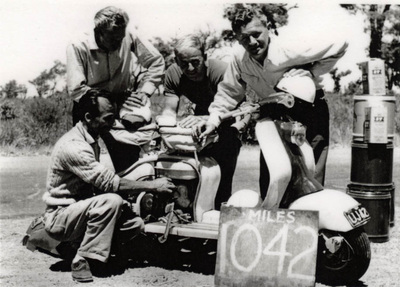 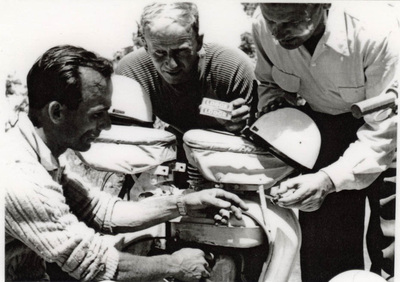 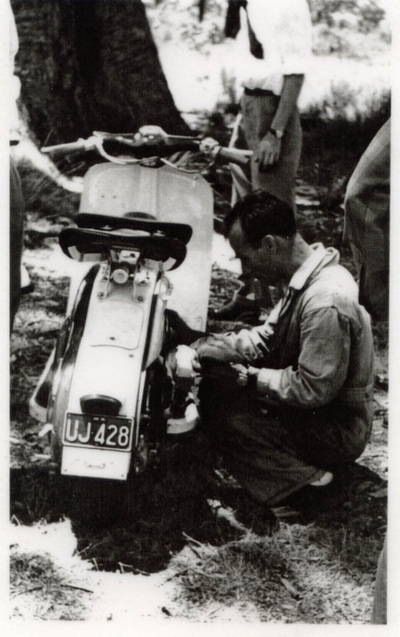 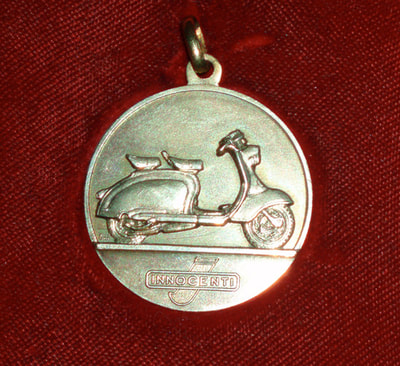 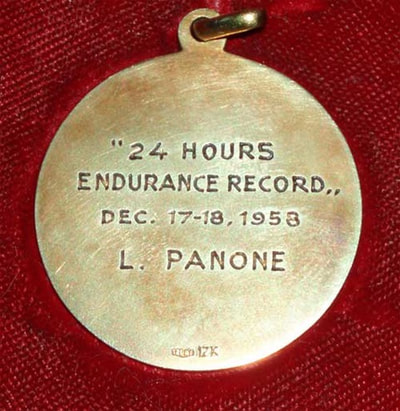 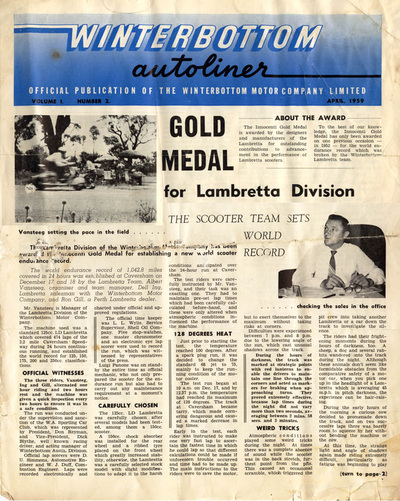 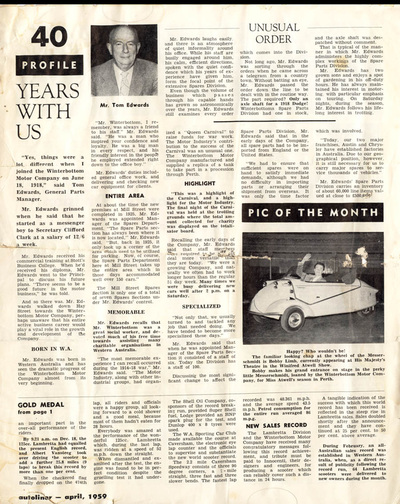 The Lambretta Division of Winterbottom Motor Company has been awarded the Innocenti Gold Medal for establishing a new world scooter endurance record.

The world endurance record of 1,042.8 miles covered in 24 hours was established  at Caversham on December 17 and 18 by the Lambretta Team, Albert Vansteeg, organiser and team manager Dell Ing, Lambretta salesman with the Winterbottom Motor Company, and Ron Gill, a Perth Lambretta dealer.

Mr. Vansteeg is Manager of the Lambretta Division of the Winterbottom Motor Company.
The machine used  was a standard 125cc. LD Lambretta which covered 474 laps of the 2.2 mile  Caversham Speedway during 24 hrs continious running, and established  the world record for 125, 150, 175, 200 and 250cc. classifications.

OFFICIAL WITNESSES
The three riders, Vansteeg, Ing and Gill, alternated one hour riding and two hours rest and the machine was given a quick inspection every two hours to ensure it was in a safe condition.
The run was conducted  under the supervision and sanction of the W.A.  Sporting Car Club, which was represented by President, Don Reyman, and Vice-President,  Dick Blythe, well known racing car driver, and acting manager of Winterbottom Austin Division.
Official lap scorers were D. U. Simmons, Automotive Engineer and W. J. Duff, Combustion Engineer. Laps were recorded electronically and charted under official and approved regulations.
The official time keeper was L. L. Wylie, Service Supervisor, Shell Oil Company. Five stop-watches, one master chronometer and an electronic eye lap scorer were used to  record the run, which was witnessed by representatives of the press.
Luigi Panone was on standby the entire time as official mechanic, who not only prepared the scooter for the endurance run but also had to carry out any maintenance requirement at a moment’s notice.

CAREFULLY CHOSEN
The 125cc LD Lambretta was carefully chosen after several models had been tested, among them a 150cc. scooter.
A 150cc. shock absorber was installed for the rear wheel and a ribbed tyre was placed on the front wheel which greatly increased stability, otherwise, the Lambretta was a carefully selected stock model with slight modifications to adapt it to the harsh conditions anticipated  over the 24-hour run at Caversham.
The test riders were care-fully instructed by Mr Van-steeg, and their task was an exacting one. They had to maintain pre-set lap times which had been carefully calculated before-hand, and these were only altered when atmospheric  condi-tions influenced the per-formance of the machine.

128 DEGREES HEAT
Just prior to starting the test, the temperature reached 100 degrees. After a spark plug run, it was decided to change the standard 68 jet to 75, mainly to keep the running condition of the motor cooler.
The test run began at 10a.m.  On Dec. 17, and by 12:37 p.m. the temperature had reached its maximum 128 degrees. The track at Caversham became tarry, which made cornering dangerous and caused a marked decrease in lap times.
Early in the test, each rider was instructed to make one very fast lap to ascertain the fastest time in which he could lap so that different calculations could be made if unforseen trouble occurred and time had to be made up. The main instructions to the riders were to save the motor, but To exert themselves to the maximum without taking risks at  corners.
Difficulties were experienced between 7 p.m. and 8 p.m. due to the lowering angle of the sun, which cast unusual shadows across the track.
During the hours of darkness, the track was marked at strategic points with red lanterns to enable the drivers to maintain one line through the corners and acted as markers for braking when approaching turns. They proved extremely effective, because lap times during the night did not vary more than two seconds, averaging between 2 mins. 58 secs. and 3 minutes.

WEIRD TRICKS
Atmospheric conditions played some weird tricks during the night. At times there was a complete absence of sound while the scooter was in the back stretch, furthest point from the pits. This caused an occasional scramble, which triggered the pit crew into
taking another Lambretta or a car down the track to investigate the silence.
The riders had their fright-ening moments during the hours of darkness, too. A sheep, a dog and several rabbits wandered onto the track during the night. Although these animals don’t seem like formidable obstacles from the comparative safety of a motor car, when you pick one up in the headlight of a Lambretta which is averaging 45m.p.h. in pitch darkness, the experience can be hair-raising.
During the early hours of the morning a curious cow decided to promenade down the track, and on two successive laps there was barely room to squeeze by her without bending the machine or the cow.
At this time, the strange light and angle of shadows again made riding extremely difficult, particularly as fatigue was beginning to play an important part in the over-all performance of the riders.
By 9:21 a.m. on Dec. 18, the 125cc Lambretta had equalled the present English record, and Albert Vansteeg took over driving to add a further 25.8 miles (9 laps) to break this record by more than 1 percent.
When the checkered flag finally dropped on the 474th lap, all riders and officials were a happy group, all looking forward to a cold shower and a good meal, because most of them hadn’t eaten for 28 hours.
Everybody was amazed at the performance of the wonderful 125cc. Lambretta which during the last lap, was ridden at a speed of 52m.p.h. down the straight.
When dismantled and examined after the test, the engine was found to be in perfect condition despite the gruelling test it had under-gone
The Shell Oil Company co- sponsors of the record breaking run, provided Super Shell fuel. Lodge provided an HNP spark plug for the test, and Dunlop 4.00 x 8 tyres were used.
The W.A. Sporting Car Club made available the course at Caversham, the electronic eye lap counter and the officials to supervise and substantiate the new world scooter record.
The 2.2 mile Caversham Speedway consists of three 90 degree corners, a ¾ mile straight, three fast and three slower bends. The fastest lap recorded  was 48.361 m.p.h. and the average speed 43.5 m.p.h. Petrol consumption for the entire run averaged 86 m.p.g.

NEW SALES RECORD
The Lambretta Division and the Winterbottom Motor Company have received many congratulatory messages following this record achievement, and tribute must be paid to Innocenti, their designers and engineers, for producing a scooter which can reliably cover such a distance n 24 hours.
A tangible indication  of the success with which this world record has been ​received is reflected in the steep rise in Lambretta sales. Sales doubled shortly after the announcement and they have continued at 25 per cent. to 50 per cent. above average.
During February an all Australian sales record was established in Western Australia, when, as a direct result of publicity following the record run, 64 Lambretta scooters were delivered to new owners during the month.